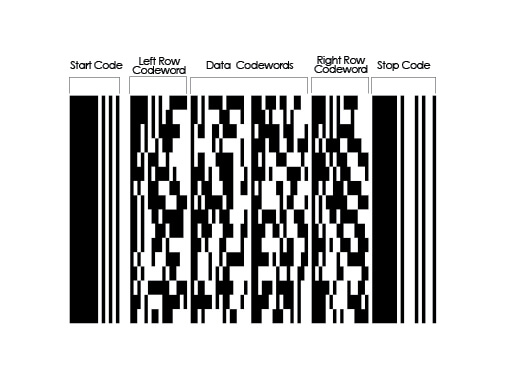 The PDF417 barcode is a type of two-dimensional code. The PDF417 barcode is a high-density, high-information portable data file. It is an ideal means to realize the automatic storage and carrying of large-capacity and high-reliability information such as certificates and cards, and to be automatically read by machines. It can be recognized by a traditional linear scanner; and a two-dimensional code requires image sensor imaging to be recognized.

The structure of PDF417 barcode

PDF417 code consists of 3 to 90 lines, each line is similar to a small linear code, and has the following content:

Each line is the same width, and each line has the same number of codewords. The length of each PDF417 code word is 17 units, including 4 black areas (bar) and 4 white areas (space) of varying lengths. The length of a single area cannot exceed 6 units. Hence the name 417. The standard stipulates that the lower limit of the width unit is 0.0075 inches (about 0.191 mm). Each codeword is based on 929 encoding, that is, the code value is 0-928. Each codeword starts with bar and ends with space. There are three different sets of codeword codes, called clusters, labeled as 0, 3, and 6. Each row uses a set of clusters in turn, and loops in turn, that is: the first row uses cluster 0, the second row uses cluster 3, the third row uses cluster 6, the fourth row uses cluster 0, and so on.

Because the information capacity of one-dimensional barcode is very small, such as the barcode on the product can only hold a few or dozens of Arabic numerals or letters, the detailed description of the product can only rely on the database to provide, leaving the pre-established database, one The use of dimensional bar codes is limited. For this reason, people are eager to invent a new code system that not only has the advantages of one-dimensional bar codes, but also has the advantages of large information capacity, high reliability, and strong security and anti-counterfeiting. In order to meet people’s needs, the American Symbol Corporation, after several years of hard work, officially launched a two-dimensional bar code called PDF417 in 1991, referred to as PDF417 bar code, that is, “portable data file”.

As a new information storage and transmission technology, the two-dimensional barcode PDF417 has received extensive attention from the international community since its birth. After several years of hard work, it has been widely used in the fields of national defense, public security, transportation, medical care, industry, commerce, finance, customs and government management.

Because the two-dimensional bar code has the advantages of low cost, information can be moved with the carrier, does not depend on the database and computer network, and has strong security and anti-counterfeiting performance, combined with my country’s large population, weak foundation, computer network investment capital is difficult, and documents The anti-counterfeiting measures require high characteristics. It can be foreseen that the PDF417 barcode is extremely valuable in our country.

Because the two-dimensional barcode can encode photos or fingerprints in the two-dimensional barcode, it effectively solves the problems of machine readable and anti-counterfeiting of the document, so it can be widely used in passports, ID cards, driving licenses, temporary residence permits, and driving vehicles. Certificates, military certificates, health certificates, insurance cards, and any other documents that need to uniquely identify a person’s identity.

Customs declaration forms, tax reports, insurance registration forms and other forms that require repeated entry or prohibit forgery or deletion can be compiled into the PDF417 barcode to solve the automatic entry of the form and prevent tampering of the form. Content.

4. Production and assembly and wiring of electromechanical products

The development of PDF417

The PDF417 barcode is one of the four most popular 2D barcodes to be developed. It was created in 1992 by Symbol Technologies, the leading manufacturer of barcode scanners at the time. (The other three common 2D codes are QR codes, DataMatrix and MaxiCode; several other codes were developed between 1988 and 1995, but they were never widely used.)

The name of PDF417 comes from the abbreviation of “Portable Data File”. The reason for adding “417” is that 4 bars and 4 spaces are arranged in each of the 17 module code words (aka characters). These characters or clusters have specific formulas for the size of each bar in the cluster.

Unlike a square DataMatrix or QR code, PDF417 is actually a high-density, stacked linear symbol with a rectangular shape. It is stacked to accommodate large amounts of data (usually containing 100 to 200 characters), and the aspect ratio can be adjusted to cope with space constraints. It has built-in various levels of redundancy, so up to 50% of the code can be destroyed, but data can still be recovered. However, generally speaking, the space occupied by PDF417 is about four times the space required by DataMatrix or QR code.

PDF417 has gained popularity in the transportation industry and is used regularly by FedEx. It was also chosen to print postage for the U.S. Postal Service, which is usually used for airplane boarding passes. In addition, you will often see it on your driver’s license and other ID cards. Other applications include manufacturing parts tracking, lottery tickets, patient wristbands and trade show clue retrieval systems.

PDF417 consists of 3 to 90 lines of data, and can encode up to 1850 ASCII or 2725 numeric characters. The code is designed to scan using a slightly modified raster laser scanner or linear CCD scanner (such as the DS6708 2D imager). Note: At the high end of the data encoding (more than 800 characters), you may find that it is better to switch to the Macro PDF version, depending on the data type, the selected error correction level and the scanner used.

In order for the scanner to easily recognize this code, there are vertical start and stop bar groups at both ends of the stacked code. Next to the start mode is the left line of code words, which contain the line number and error correction level. The right line of code words next to the stop mode provides more information about that line. All rows are the same size, and each row has the same number of code words.

For humans, it is easy to recognize PDF417 barcodes because you will see these bold start and end bars contain highly compact digital patterns. If you look closer, you will see a vertical arrangement of visible line separations between code words. Next time you have to pick up your driver’s license, be sure to look for the barcode. Even if you don’t know what it is talking about, this is a good opportunity to impress you. 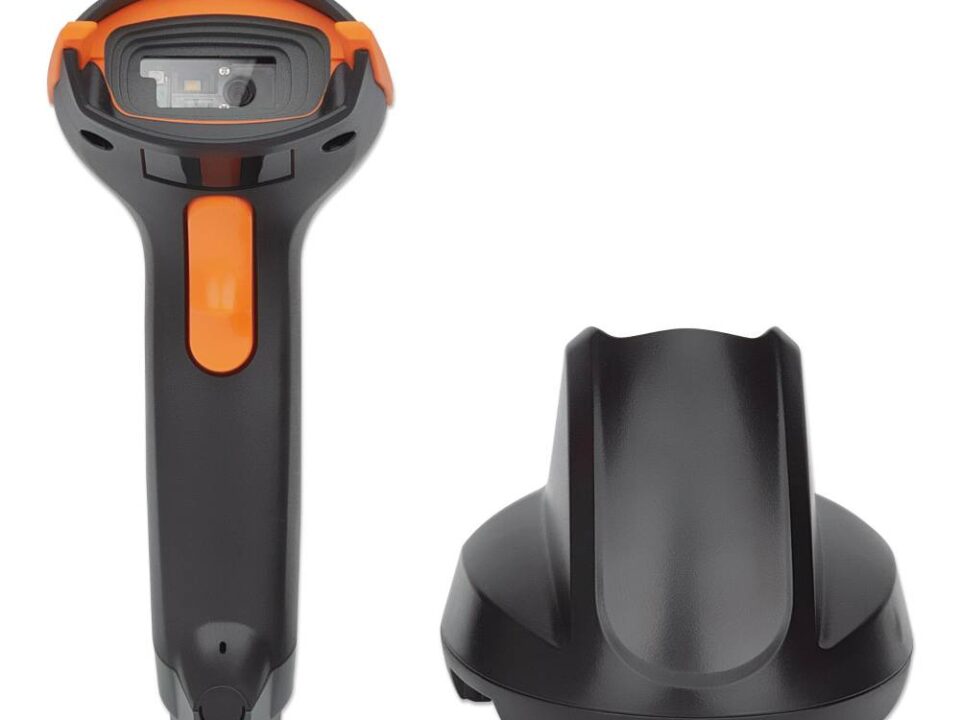